skip to main | skip to sidebar

Last weekend I went on another adventure with friends, up to the AMC Joe Dodge Lodge in Pinkham Notch. I had always wanted to go snowshoeing in that area, so I signed up for the trip. I left work on Friday and made it up to the place in about 2 hours and 40 minutes. I enjoyed the drive, as it was a beautiful, warm day, and the view of the mountains was gorgeous. I drove up on one side of the Presidential Range, and down the other. The AMC lodge and visitor center is at the base of Mt Washington, where many people park there to hike up to Tuckerman's Ravine, and ski down the bowl. That's a little more adventurous than what I wanted to attempt. 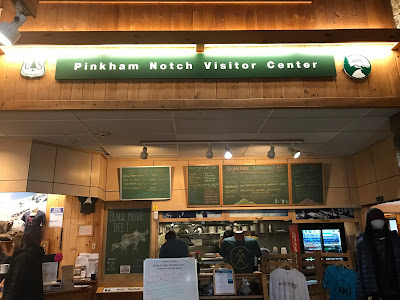 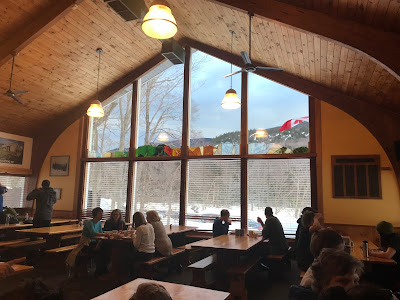 After a hearty breakfast 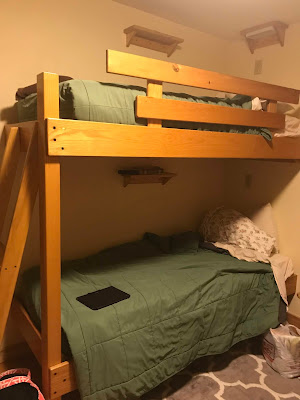 we were ready to go for a snowshoe hike. We had a wonderful guide who pointed out animal tracks, interesting plants and fungi, and knew the trails thoroughly. 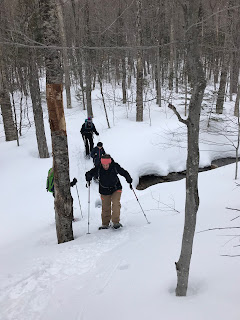 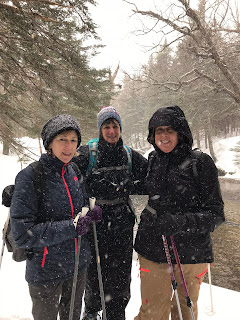 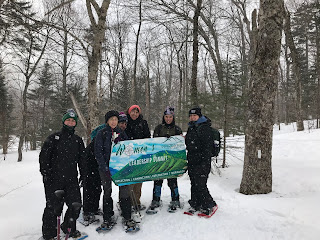 It was great to meet new people, to get outside, and enjoy the meals prepared for us! 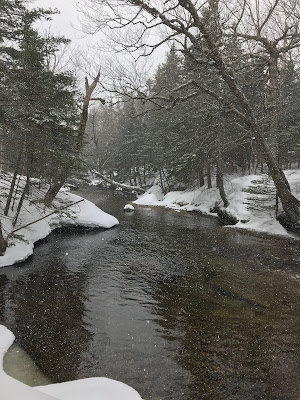 I'd like to do several block prints from these images! 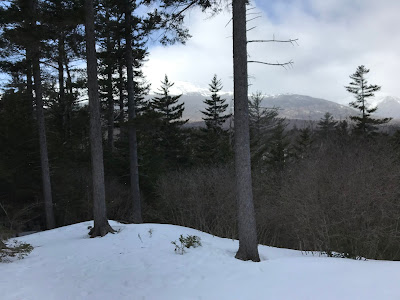 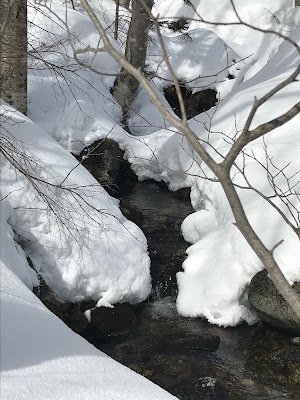 I noticed a little heart in the melting snow! I hope I will be able to get back there next year!
Posted by Jane Grant Tentas at 5:46 PM No comments:

I just came back from a vacation trip to California last week. It was a nice break from the snowy and cold weather of the East coast, although I did see a lot of snow from the plane, as we travelled to the West coast. The views of all the mountain ranges were quite spectacular! 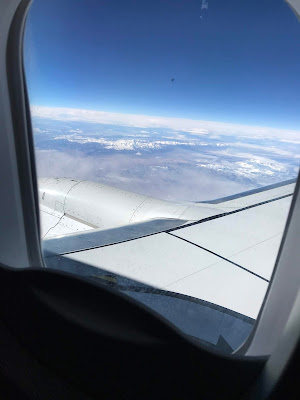 We landed at the San Francisco airport in the midst of a rainy day. California has been having an unusually wet season, with flooding in various parts of the state. It was also a bad year for fires! Fortunately, most of the trip was dry and relatively warm.

We did the touristy things that tourists do---wine tasting in Sonoma, driving down Lombard Street, eating at the piers, checking out the seal lions, and visiting Monterey and Pebble Beach.

We enjoyed a visit to Cline Vineyards, where we saw a large flock of sheep cleaning up the weeds around the grapevines. After a delicious tasting of a wide variety of wines, we ended up buying four bottles each. That led to a mad scramble to figure out how to get the wines home safely. After buying bubble wrap sleeves for each bottle, they travelled back home without incident in our slightly heavier suitcases. 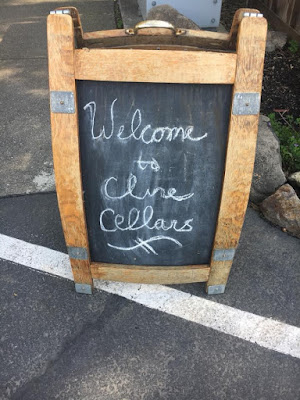 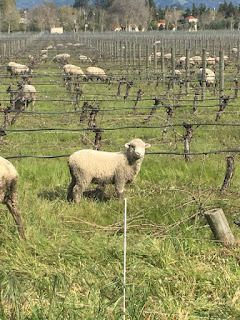 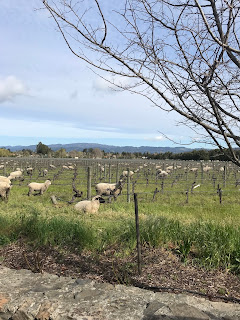 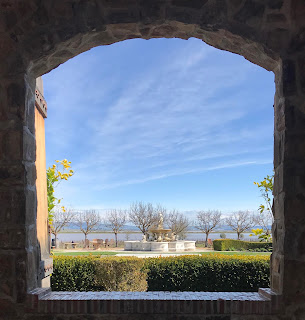 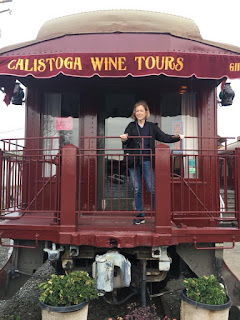 The seal lions were hanging out in their usual spot at Pier 39 in San Francisco. Lots of barking and flopping around as they interacted with each other in the usual manner of their community. 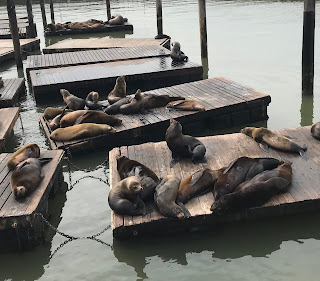 Cool juxtaposition of old and new architecture, taken from a window in the SF Museum of Modern Art. 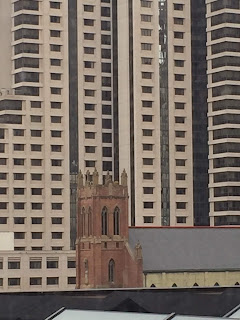 A creepy sculpture of giant spiders 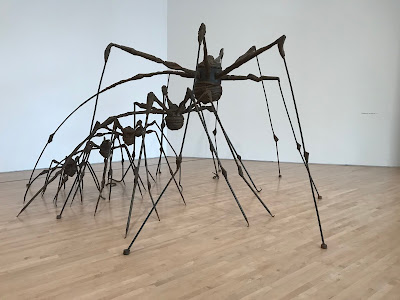 Had to stop at Ghirardelli Chocolate Shop. 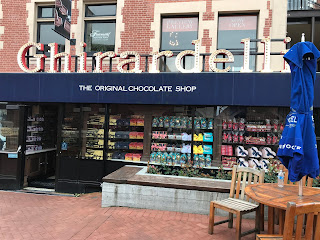 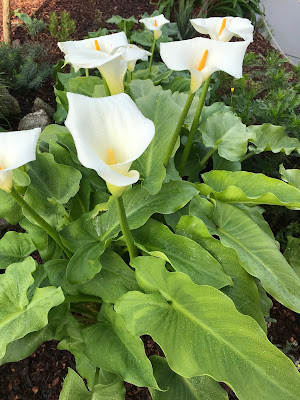 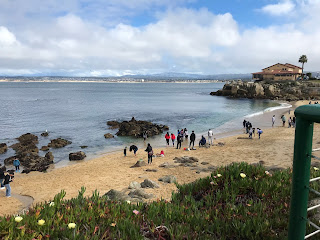 Gulls hanging out, with the famous PebbleBeach Golf Course in the distance 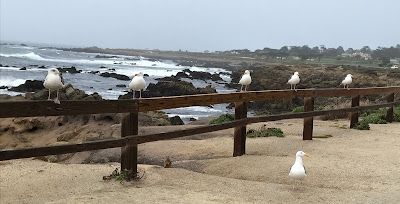 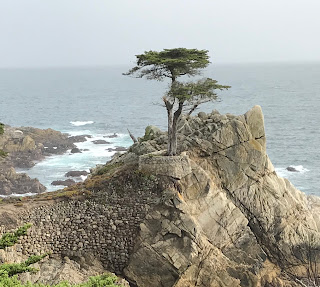 Another California Gull posing for the camera 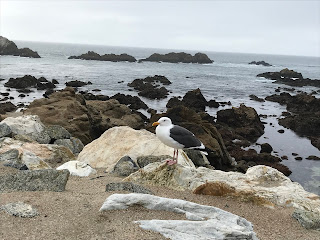 These are some of the highlights of my trip. Won't include any photos of relentless traffic that one encounters everywhere. Getting in and out of SF is often a slow ride. I took the commuter train one day, and even though they pack you in like sardines, it was still better than getting stuck in traffic.

I love to travel, but am always happy to be home again!
Posted by Jane Grant Tentas at 7:02 PM 2 comments:

Jane Grant Tentas
I am an art teacher who loves to draw and paint, as well as illustrate for children. I also enjoy printmaking---especially block prints. Whatever I do as an artist, I have to remind myself---no pressure---it all starts by just putting pencil to paper.